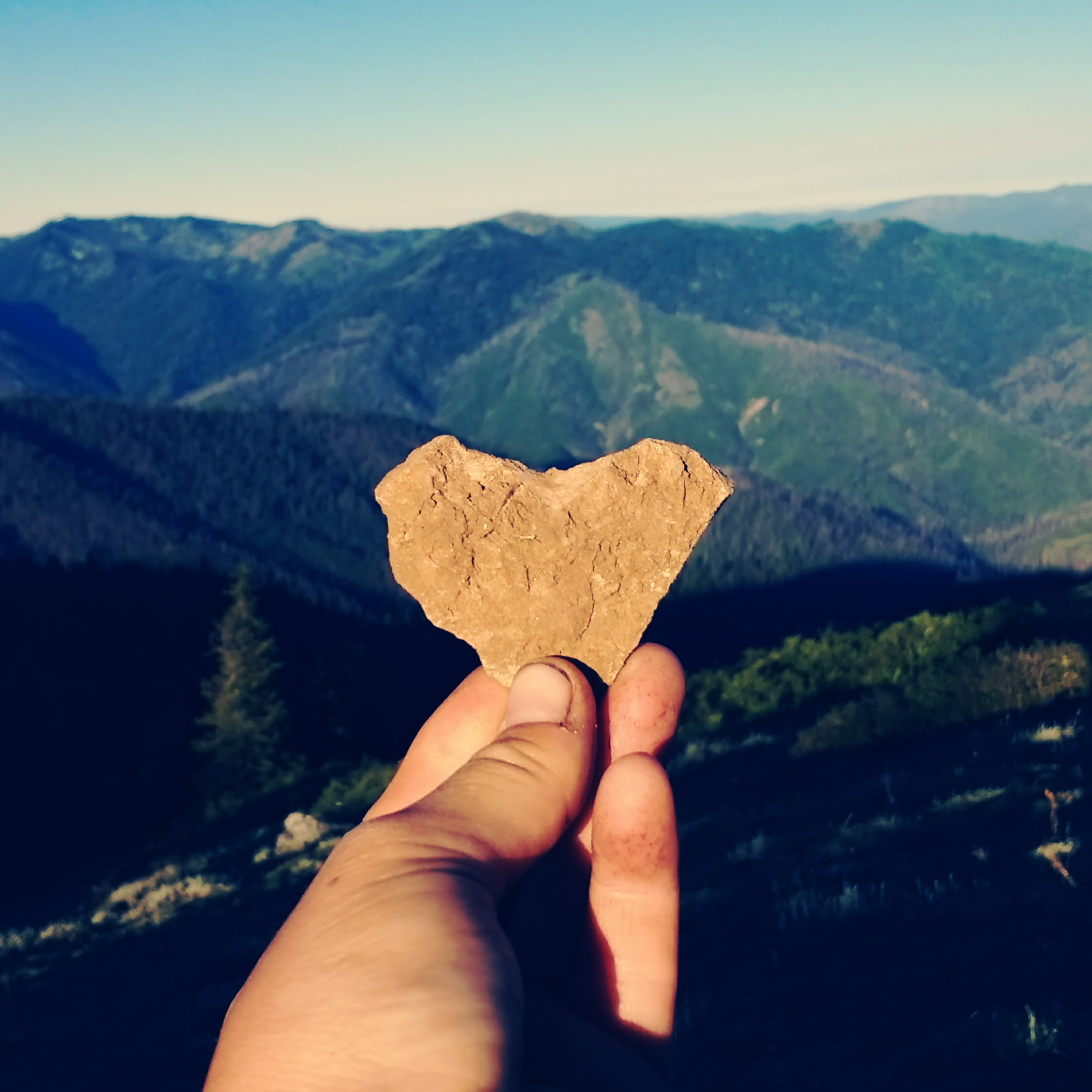 (This blog entry is from my Patreon blog, where you can see my PCT blog entries before anywhere else, as well as support me financially on this grand adventure. Along with early blog posts, Patreon backers also receive access to trail comics, drawings, and videos.) 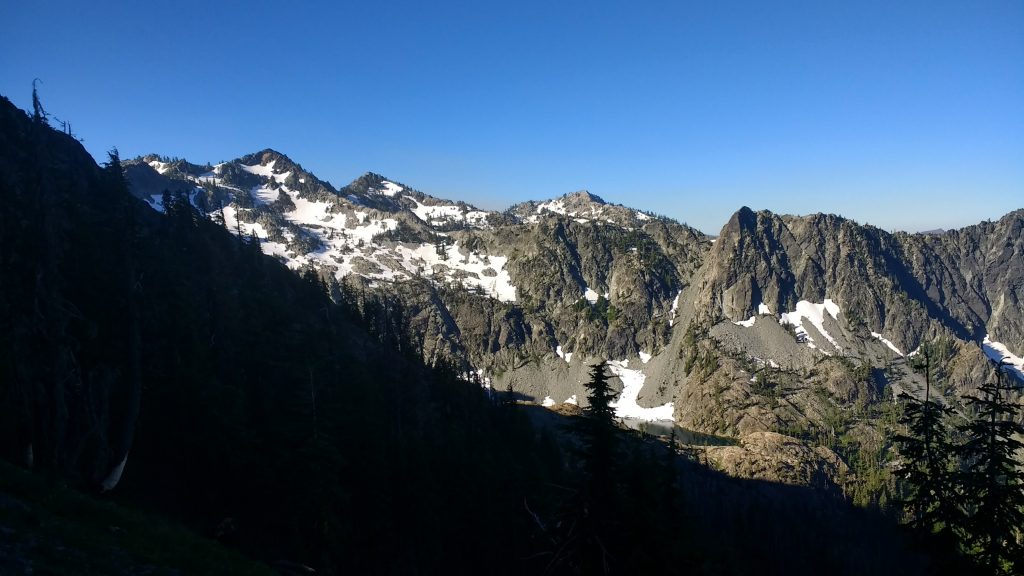 Seeing as most of you readers are actual human beings (I hope?), living the lives of actual human beings (I’m not so sure about that one), you have all faced failure at some point in your life (or are you a statistical anomaly?). Failed math test, failed date, or failed to meet someone’s expectations of you. Call it disappointment, defeat, or losing. Whatever. It sucks. What sucks more is when you planned your thing for a long time, anticipated grand results, only to be shut down halfway through.

I started planning this thru hike over a year ago. Those who know me personally probably remember me babbling non-stop about the trail, backpacking, and the wilderness in general. I knew it was going to be hard, and I thought I prepared myself well enough for the challenges I would face, but they were unlike anything I had experienced in my life, and they shook me to the core.

From heat exhaustion to elevation sickness, to the common cold threatening to fry my brain like an egg. All of my problems thus far were internal and could be fixed with TLC and some R&R. By the time I escaped the desert and ventured into the wilds of Northern California, I thought I was invincible. Everything that tried to kill me was back in the desert, and there was no way I’d have to deal with them again up here in the cool shade of giant sequoia trees, and lower elevation climbs.

But it turns out I’m not invincible. I have a fragile fleshy shell, and it needs delicate care to keep it in tip top condition. I truly am envious of people (like my husband) who *are* nearly invincible. It took him 700 miles to feel any real pain from hiking. It must be nice.

Sometime around Seiad Valley, my shoes started rubbing the backs of my ankles. I did what I always do and slapped some tape over the hot-spot to prevent blisters from forming, and kept hiking. No big deal. But it was a big deal. My hot, sweaty feet caused a reaction to the latex, and then specifically the adhesive on the tape. By the time we reached Ashland, in Oregon, the backs of my heels were covered in small, leaking blisters. I still hadn’t made the connection and assumed the tape didn’t work and my shoes rubbed me a blister anyway.

Evan and I got a motel room for our wedding anniversary coming up, and I planned to wear sandals for the next few days to let my feet heal. I also did what I always did with painful blisters: I drained them. And I forgot to clean my tools beforehand.

What started as a simple allergic reaction burst into a raging infected rash that resulted in two trips to an urgent care facility, two types of antibiotics, heavy duty antibacterial cream reserved for burn victims, four boxes of gauze pads, and my feet being wrapped up like I had broken both ankles. Oh, and did I mention it was all super itchy? Although I was now allowed to use the motor carts at grocery stores (vroom vroom!), it also resulted in a decision. I probably have a long healing period in front of me before I can even put on socks and shoes. My antibiotics make me sensitive to the sun (read: rashes), and we only have so much money and so much time.

I’ve decided to get off the trail and stop my PCT thru hike.

But I’m not quitting. I am not a quitter. I hiked over 800 miles, something most people barely dream of. I know people whose goals are to hike *one* mile. What I’ve done is extraordinary, and what I experienced I will never forget. I may not have finished the PCT, or even half of it, but holy cow man. Eight. Hundred. Miles. That’s more than Texas is long. I walked across Texas, y’all. TEXAS IS A HUGE STATE. 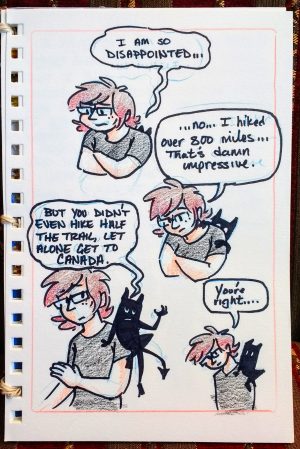 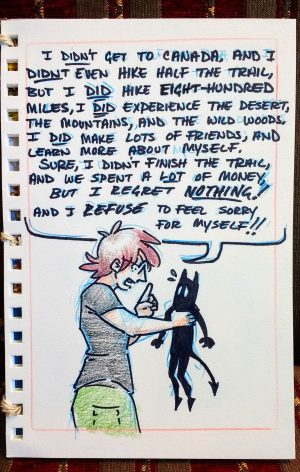 I am reminding myself daily that I did not ‘fail’ my thru hike. I did not lose, and god forbid I did not disappoint anyone. I am putting my health before my ego and taking a break. The trail will still be there; the mountains aren’t going anywhere.

On the flip side, I’ll still be able to hike vicariously through my friends still on trial, and through Evan. Yes, my husband has decided to keep hiking. He deserves to make it to Canada. He worked so hard for this, and I don’t want to be the one who holds him back. This was all his idea anyway. I’ll be supporting and cheering him on from the sidelines, while also dealing with his resupply as he hikes through the most remote parts of the PCT.

So, I wrote that post shortly after deciding to get off the trail, and it feels like a lot has changed in the two weeks since.

I’m settling in well in a friend’s place near Seattle, soaking in as much affection as I can from my cats. My feet are healing nicely and as a side effect of my not walking 20-ish miles a day I have a layer of callous several millimeters thick peeling off my heels. Honestly I’ve become kind of a couch potato during my break. But I’m not complaining! I’ve been working on art and planning my next steps. Do I stay here for the next month or so while Evan continues to hike? Do I get a job?

Or do I get back out there as soon as I can and take advantage of this amazing opportunity I’ve afforded myself?

If you guessed the latter, you are correct. 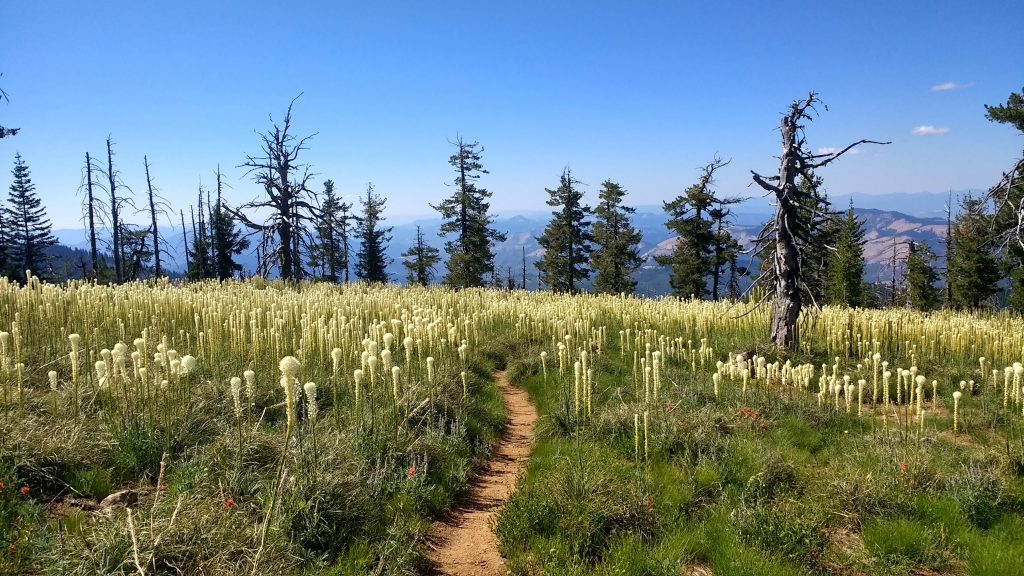 As much as I missed having a ‘home’, my cats, my computer, and the ability to draw whatever I want whenever I want… I miss the trail so much. I miss my husband, my friends, and the clear sense of purpose every day provided me. You never know what you have until you’ve lost it… and I didn’t appreciate the freedom and clarity backpacking gave. Stepping back from the trail and observing it from afar I’ve had a moment to consider everything I loved about it.

Believe it or not, it’s actually difficult for me to write romantically about things I’m currently experiencing. This is probably why for the most part I’ve only written about my pain and frustrations on the trail. I haven’t had a lot of time or mental space to have romantic thoughts about the trail; pain tends to take that luxury away from you.

I wrote that just three weeks into my thru hike, when things were taking a downward turn for me. I was sick with who knows what, and I was honestly questioning why I was doing the PCT. Why was I making myself suffer so much? What kind of perspective could this adventure possibly supply me?

Honestly, it took me until I was three weeks off trail to realize the lessons I’ve learned so far.

I’ve learned to be more empathic; seeing and understanding situations from the perspective of those around me.

I’ve learned to limit how much I complain about things that the entire team is suffering from; just shut up.

But I’ve also learned that if I am suffering, it’s okay to sit down and take a break; but be reasonable and don’t be lazy.

I’ve learned that even the strongest people have their problems; which can take your understanding of a person to a whole new level.

I’ve learned that while I often yearn for a solitary life, I don’t know how to function without my husband; my partner-in-crime, my cheerleader, my best friend.

And finally, I’ve learned it hurts no-one to open up and talk about the demons that plague you, but it leaves deep wounds to keep them caged. 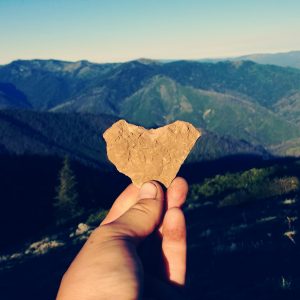 So, it’s been decided that I am definitely getting back on the PCT! When Evan reaches Portland in two weeks, I’ll bus down there and we’ll continue our grand adventure from there.

My adventure didn’t end, I just took a break. 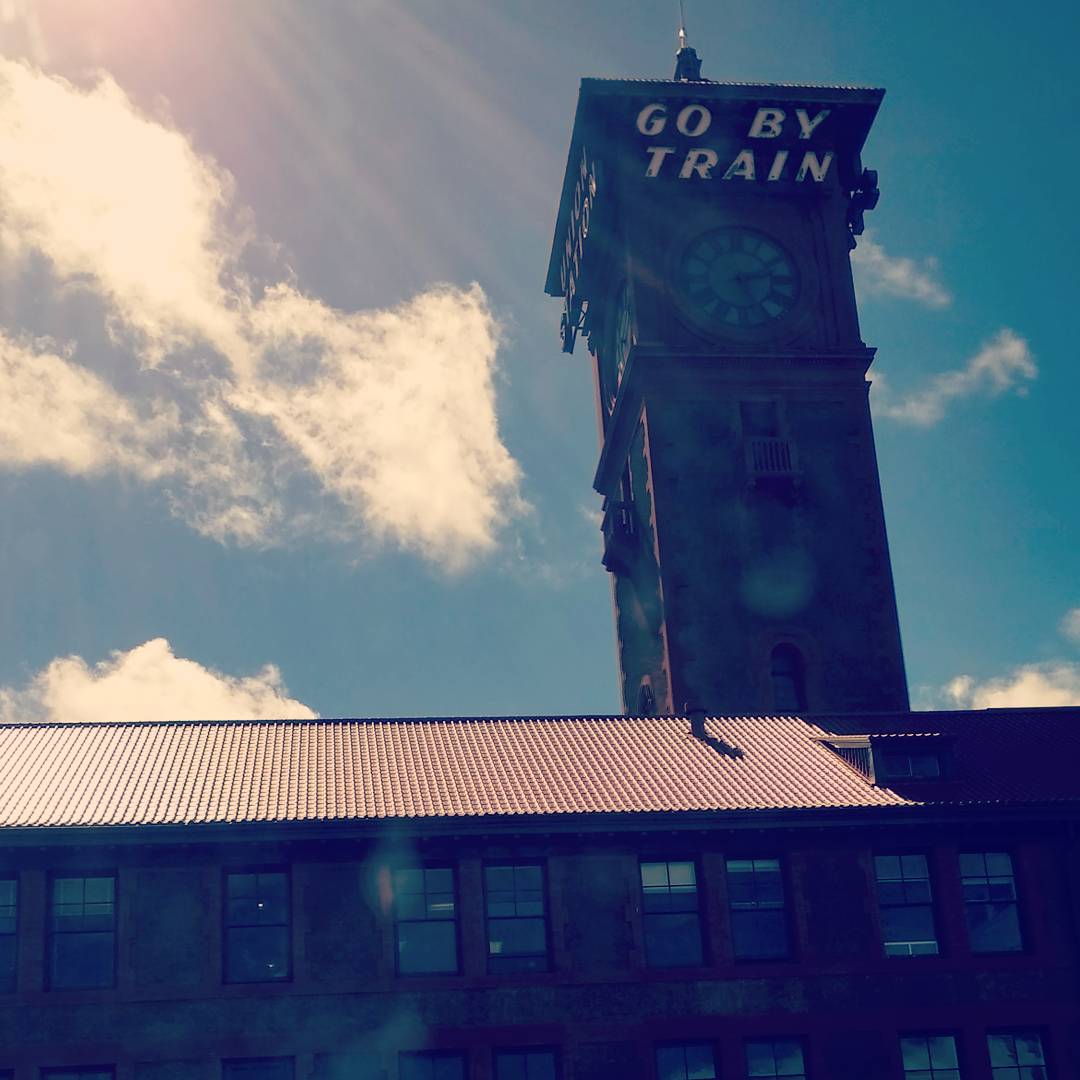 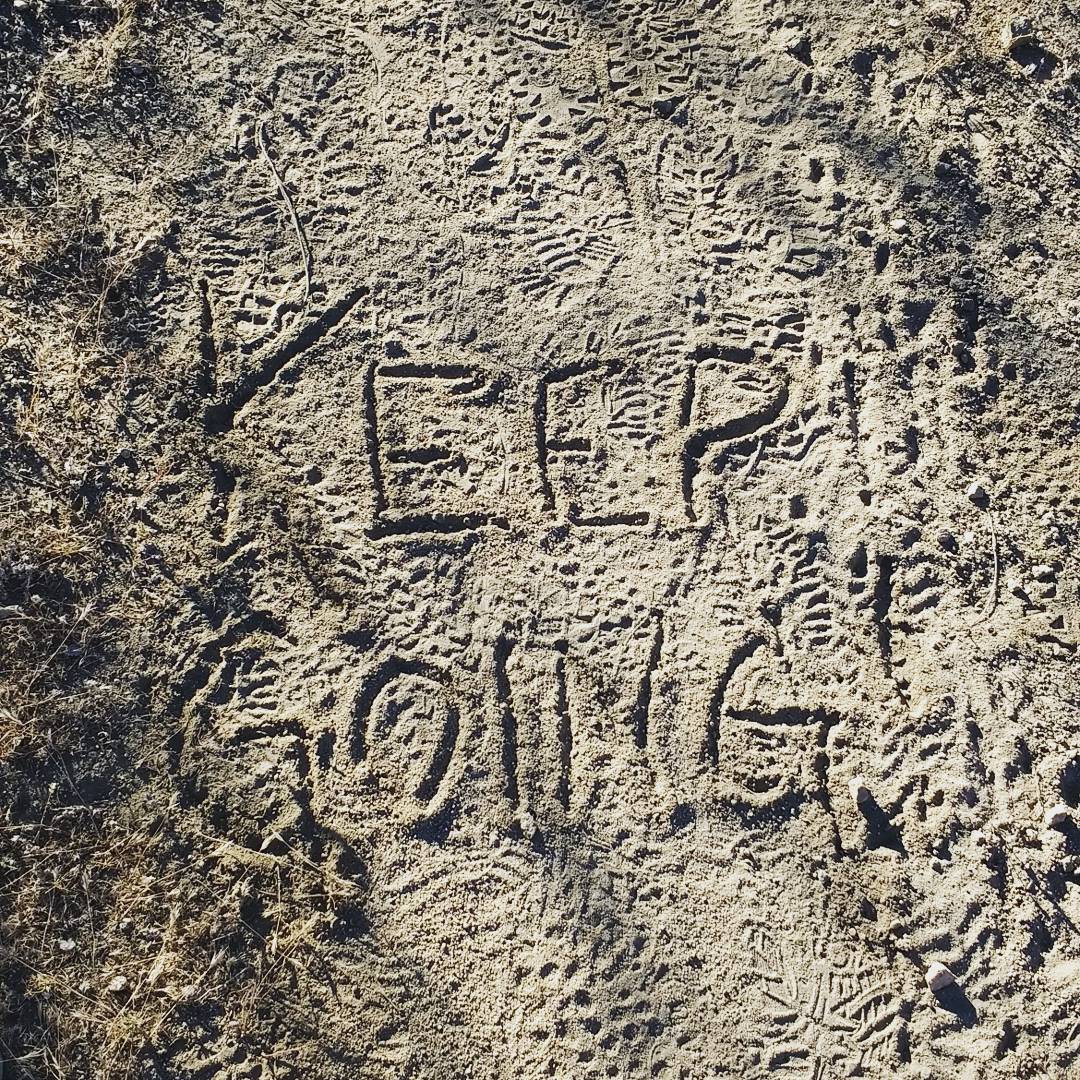 It’s always something isn’t it? 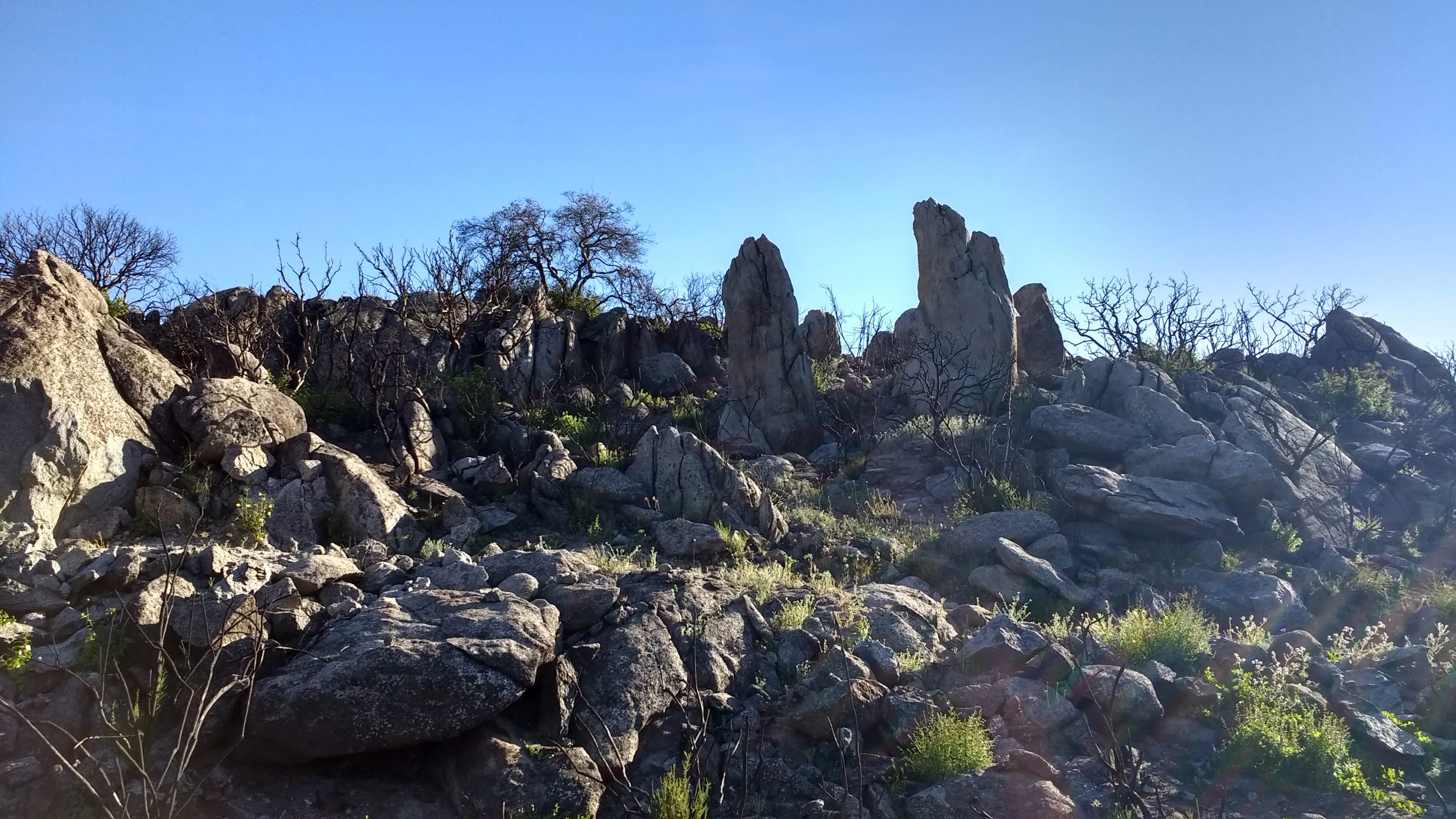 But It Builds Character, Right?